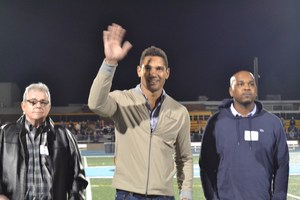 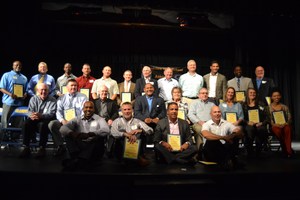 Grandview High School hosted first Hall of Fame weekend Friday, October 14 and Saturday, October 15. The weekend started out with a pre-game reception where the community had a chance to meet and greet inductees. They were also recognized at halftime.

“I had a lot of memories in this school. I had a lot of great times. I learned a lot and it’s just really special being back,” said Josh Freeman, inductee.

Freeman was one of the 30 outstanding athletes that were inducted into GHS Athletic Hall of Fame. Freeman graduated in 2006 and has gone to have a stellar football career at Kansas State University that led to him being a first round NFL draft pick in 2009 and selected by the Tampa Bay Buccaneers.  During his impressive NFL career he’s played for the Minnesota Vikings and Indianapolis Colts.

“Obviously Grandview has a rich tradition in athletics. Being a part of the inaugural class is pretty special.  A lot of these guys here are guys with very storied careers and it’s really cool to come back,” said Freeman.

On Saturday there was an open house at GHS where family and friends toured the school. After lunch the inductees were recognized during an awards program. Each was honored with a plaque and their name being engraved in the school’s Athletic Hall of Fame wall.

The opportunity allowed coaches and athletes like Freeman to reflect on their time spent as Bulldogs making lasting impression on the fields, courts, and track.

“Something that makes Grandview very special is the cultural diversity. We have kids from all walks of life, all different races and everybody got together and were unified by being Bulldogs together,” said Freeman.

Every year athletes will be inducted into the GHS Athletic Hall of Fame. If you know anyone deserving of this outstanding honor you are encouraged to nominate them.  You can do so by going to ghs.grandviewc4.net and click on ‘Athletics.’  Nominations are now being accepted.

Click here to read the bios of each athlete and coach who was inducted.