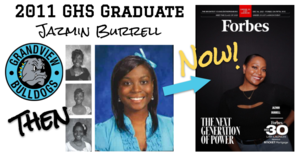 Forbes magazine recently released their 30 under 30 list for 2022 and a Grandview alumna made the list for Marketing and Advertising. Jazmin Burrell was a 2011 graduate. She was a national qualifier in speech and debate (Public Forum) as well as a state qualifier (oratory and radio speaking). She was very involved in NHS and many other school organizations.

Jazmin currently resides in NYC and works for Snap (the parent company of Snapchat). She has worked for a number of other well-known corporations as well, including Spike Lee's Spike DDB.