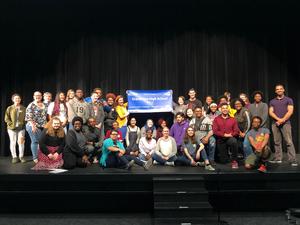 Grandview High School recently earned a Blue Star award for Sister Act!  This is an extremely prestigious award nomination for theatres in this area.

The GHS Theatre Department nomination was for Outstanding Actress in a Feature Role played by student Sydney Walker.

The last nomination GHS received was for Samuel Lunceford in Little Shop of Horrors.

Blue Star is a professional organization that attends and judges all productions in the KC area (including the Kansas side).  Forty-eight productions were judge and evaluated for Blue Star awards this year.